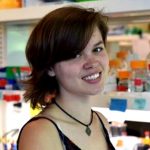 Breaking Up is Hard to Do

Jocelyn Haversat studies how sperm and egg are made, and what regulates the process of their creation

The microscopic nematode C. elegans is about a millimeter at its lengthiest. It’s generally a self-fertilizing hermaphrodite (XX), with an occasional male mutation (XO). C. elegans also shares many biological characteristics with mammals, including humans.

During meiosis, a single cell splits twice, producing four cells. Each contains half the amount of genetic information. These are the sex cells, also known as gametes. The chromosomal segregation that takes place during this time ensures the correct inheritance of genomes.

However, there are times when this process goes awry: When DNA breaks and isn’t repaired correctly, this can lead to developmental disabilities.

When chromosomes divide to become sperm and egg, they physically change chromosome pieces, or arms of DNA, says Haversat. That provides genetic diversity; for example, it’s one of the many reasons why siblings aren’t identical.

The physical exchange of those DNA pieces holds the chromosomes together. It provides tension. That tension is required during chromosomal segregation. Without it, chromosomes won’t separate properly; the cells would have the wrong number of chromosomes, called aneuploidy. Aneuploidy leads to conditions such as Down syndrome or Klinefelter syndrome. Haversat and her colleagues at the Yumi Kim lab have identified a type of protein called a kinase that sits at these sites of crossover. It appears to phosphorylate target proteins, enabling successful crossover formation. Without it, crossovers will not form, and no progeny will be viable.

During meiosis, when breaks form, they need to be repaired correctly, otherwise any abnormalities will propagate. “Where the DNA breaks and repairs with a new piece of DNA has to be really tightly controlled,” she explains. “Any abnormal repair could cause the cell to lose genes or be repaired in the wrong orientation.”

This process in C. elegans also occurs in mammals such as mice and humans. Understanding how this kinase functions could potentially lead to the development of therapeutics or improvements in screening for conditions caused by aneuploidy, Haversat adds.

Haversat is quick to admit she doesn’t have an entirely traditional biology background. She majored in animal science at the University of Massachusetts Amherst, where her research projects included epigenetic reprogramming during pre-implantation development and cellular communication in vitro oocyte development, as well as environmental toxicology. She attended Tufts Veterinary School, and worked in a veterinary hospital preparing and analyzing patient cytology samples.

“Then I decided I didn’t want to be a vet. I wanted to work in a lab, and teach,” she says. “But first, I took a year off to hike the Appalachian Trail, and then go to Alaska.”

But when she visited Hopkins, she knew she wanted to study here within 24 hours of setting foot in Baltimore, she says. She felt that it was environment that thrived on collaboration, with labs throughout the program willing to help each other out.

“I wanted to be happy for the next five years of my life. I liked that it was a smaller umbrella department. Students seemed happy, and people were supportive. It’s a wonderful community,” she adds.

Ultimately, Haversat says, she would like to become a biology professor and teach undergraduates. Hopkins has helped in that regard, offering resources on teaching at the college level, using evidence-based teaching practices. For another project during her third year in her Ph.D. program, she got to develop and pilot a genetics lab where undergraduates are taught CRISPR and they get to use it in worms. She’s also applying to the Dean’s teaching fellowship.

“I love seeing a light bulb go off, and that ‘Aha!’ moment. I love human interactions, and propagating human kindness to students who really need it. People say, ‘Oh, if you can’t do science, you teach,’ and I don’t like that. Very good scientists should be teaching,” she says.

Dr. Kim is extremely accessible, Haversat says. Her office door is always open. She’s supportive of Haversat’s teaching interests, and an amazing biochemist. And the way she asks and answers questions, Haversat says, is like no one else in the field.

“For example, with my project, it would be easy to just find the role of the protein, knock it out, and then analyze the phenotype. Other worm labs would do that. But Yumi has taken it a step further. She said, ‘Let’s express this in vitro at the bench, and show mechanistically what this protein is capable of doing.’ We are looking at genetics, biochemistry, and cytology and fusing together a bunch of different fields to develop a compelling and convincing story,” Haversat says.

Haversat remains excited about what she’s doing and enthusiastic about her prospects, like continuing to work with students. And she really likes Baltimore and how it supports her joint interests in science and art. “Baltimore is an authentic city; it fosters an amazing environment for community engagement. There is so much character, and people have so much love for the city for a lot of really great reasons.”

Work-life balance is very important to her: In addition to hiking and travel, Haversat plays in a bluegrass band and performs in a puppet troupe.

Advice from the teacher

Haversat urges prospective students to be true to themselves when evaluating what they’re looking for. She’s happy, she says, because she’s found a place that enables her to have the opportunity for research, as well as a life outside the lab.

And she’s also got advice for current students to help them get the most out of their time here. “Before coming here, I had never taken a biophysics class, and then I needed to. My program got me a tutor, for free. Think about what you need and if you are getting it. If you aren’t getting it, do something about it. Talk to the people you need to talk to—your boss, your department, whoever. There are so many resources here.”