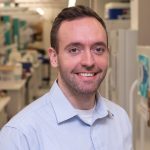 Light Up Our Lives

Say you eat a cheeseburger. The fat in that burger gets absorbed by your intestine, which makes particles called lipoproteins. They carry the fat out of the intestine and through the bloodstream and over to areas including the heart, brain, or muscles, where it can be used as energy.

But while lipoproteins—such as low-density lipoprotein (LDL) otherwise known as “bad” cholesterol—are circulating around the bloodstream, they can get trapped in the walls of blood vessels. Over time, these particles can build up and cause cardiovascular disease, such as heart attacks and strokes.

Although several different classes of lipoproteins exist, the types carrying Apolipoprotein-B are particularly likely to cause these kinds of health conditions. That’s what Ph.D. candidate James “Jay” Thierer studies at Johns Hopkins. He sees cholesterol blockages clearly: through translucent zebrafish.

Until zebrafish are about a week old, their bodies are translucent: Researchers can see right through them, including to their eggs.

“Where some people see caviar, I see 10,000 experiments,” says Thierer.

To track cholesterol in zebrafish, Thierer and his colleagues use NanoLuc, a protein very similar to the Luciferase protein that makes fireflies light up bright yellow at night. They have genetically engineered the zebrafish so that every time the fish make bad cholesterol, they also make this glowing protein.

These light-up zebrafish get used for numerous experiments: First, to find new drugs that can lower cholesterol and prevent heart disease. And second, for genetics research: To understand the gene that makes bad cholesterol go up and down, and examine why some families have high cholesterol and why some don’t.

Since zebrafish aren’t exactly swallowing pills, how do Hopkins researchers assess a drug’s effectiveness on them? Thierer collaborates with Jeffrey Mumm, Ph.D at Johns Hopkins Medicine, who has an automated robotics platform called ARQiv-HTS that will take fish larvae and place it in a well with a particular drug. After two days, it will measure how much the fish is glowing. If the fish glow less, this is a drug that can potentially lower cholesterol levels.

The team is currently working through a library of existing drugs, known as the Johns Hopkins Discovery Library (JHDL), which is a grouping of about 3,000 drugs that have been cleared for use in humans. In about three months they will complete that group and move onto their next set: a 30,000-compound library.

“It’s not completely random,” Thierer says. “The drugs are biased toward somewhat smaller, relatively uncharged molecules. Every week we screen about 100 drugs, and every week we get about one that makes the fish glow less.”

Humans and zebrafish have a surprisingly similar genetic structure, and the majority of genes associated with human disease have a zebrafish counterpart. In zebrafish, the gene “pla2g12b” has been identified to lower cholesterol levels significantly. Researchers can then study humans who have a mutation on this gene and see if it also lowers or raises cholesterol.

Cardiovascular disease is the leading cause of death worldwide. And although we do have medication to address it, we need new and better ways of helping people, says Thierer. “My project is unique in how directly it relates to human diseases…using zebrafish opens up a lot of opportunities to understand why heart disease runs in families and how to lower bad cholesterol.”

Thierer fondly remembers the first time he ever peered into zebrafish under a microscope. “I was so blown away,” he says. “I could watch every part of their bodies, their hearts beating, and the blood moving around. It’s a powerful system where you can physically see what’s going on.”

As a biology major at the University of Maryland, College Park, Thierer’s diverse research projects ranged from the ethylene hormone signaling pathway in algae to cholera epidemiology. He liked research because although there were absolute properties of science, you could still question and challenge through hypotheses. You could make discoveries, but remain quantitative.

His rotations in Hopkins’ CMDB program included a yeast lab with Kyle Cunningham, Ph.D.; an in vitro RNA lab with Sarah Woodson, Ph.D.; and a neurobiology lab with Marnie Halpern, Ph.D. “I think this is a good way to ensure people make an educated decision, and it allows you time to learn lots of different techniques,” he adds. After his rotations he decided to join Steven Farber, Ph.D.’s lab at the Carnegie Institute because it combined his dual interests in zebrafish and cardiovascular disease.

There was a lot that could have gone wrong with the work, he says. For example, the glowing protein could have blocked cholesterol instead of mirroring it. But it didn’t, and they’re testing drugs constantly to make progress in cardiovascular disease treatment. And while he is thrilled with the work that’s been coming out of the lab, he emphasizes that in no way could he have done it alone.

“This is not just my work. A huge number of people have been involved. It has ballooned to encompass many professors, graduate students, and postdocs. It’s a growing team,” he says.

Thierer has submitted his thesis and will receive his diploma in December. He’ll still be working at Carnegie for the next several months on this project. After that, he may continue working with zebrafish as a postdoc, or get involved with an independent research position.

Regardless, he’d advise potential students considering Hopkins to find something they’re passionate about: If you truly care about your work, he says, everything else will fall into place. Also that Hopkins’ rotations serve as a wonderful way to try out new research experiences and not limit yourself. And finally, don’t fear “imposter syndrome,” because it’s a lot more common than you think.

“I think if you care about something and work hard, nothing is going to keep you from succeeding,” Thierer says.