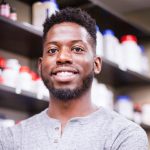 Say you’re an orchestra conductor. And the musicians are playing a piece. But it sounds…not quite right. You can’t hear it when they all play together; it’s only once you isolate and observe each of them, individually, that you can figure out what’s wrong.

Okafor works in a single-molecule biophysics lab, studying gene editing technology, primarily Clustered Regularly Interspaced Short Palindromic Repeats (CRISPR)-Cas9. Cas9 is a part of a larger network of CRISPR proteins and RNAs. When used with its guide RNA, it essentially becomes a programmable DNA cutting and binding protein. This is done by “reprogramming” the guide RNA to match locations in the genome researchers want to target.

Okafor’s work also focuses on how individual molecules behave within complex biological systems. He designs different assays to measure CRISPR-Cas9’s accuracy in different scenarios, and how changes to the protein and RNA affect its ability to assemble a complex or target different places in the genome.

He does this using high-powered optics, such as multicolor fluorescence, super-resolution imaging, combined force and fluorescence spectroscopy, and single-molecule pull-down that provide nanometer resolution and millisecond temporal resolution. This is beneficial because most things in the cell happen at this spatial and temporal scale, which gives researchers the ability to observe biochemical reactions in real-time.

“We are interested in studying DNA- and RNA-binding proteins because they have many roles in controlling gene expression,” says Okafor. “These proteins are implicated in many diseases, including cancers. By understanding how they behave individually, we can find spots on the protein that may be amenable for drug targeting and protein engineering.”

The CRISPR Cas-9 protein is a workhorse in terms of gene editing: It can correct any disease that arises from gene mutations, Okafor explains. For example, it can be used to fix mutations that cause hereditary forms of blindness and deafness. Mutations in the cell can also contribute to cancers: If a cell acquires too many mutations to certain genes, it can become malignant.

Outside of health, CRISPR also has implications in agriculture and food production—such as genetically editing a type of tomato to become more cold-adaptive. But that’s a long, long way away, Okafor says.

“CRISPR and Cas-9 are normally used in research to study gene function, and how this turns on and off genes. You can use it to turn off a particular gene, and see what happens,” he says. “You study the function by breaking it.”

Okafor is quick to point out that his background is not in biochemistry or biophysics. He received his undergraduate degree in neuroscience from George Mason University, because he wanted to do neuroscience research.

But after working in that area for a while, he learned from his mentors that most neuroscientists didn’t have a neuroscience bachelor’s degree. Okafor decided to broaden his background, so he ended up getting a master’s degree in biology from University of Maryland Baltimore County (UMBC), which provided a more comprehensive knowledge of developmental biology.

Growing up in Maryland, Okafor knew of Hopkins’ reputation: “Hopkins was just the best,” he says.

He came here because he liked the umbrella program aspect of CMDB, and wanted to do a rotation in each of the four specialties: cell biology, molecular, developmental, and biophysics. Even with obvious overlap between the specialties, he found this approach useful.

“I tried to explore everything and figure out what excited me the most, and what environment I felt I could thrive in. And I knew cutting-edge technology and gene editing was something I wanted to know more about, and studying it in such great detail was really interesting. I can also collaborate and reach out to anyone I had a rotation with, which I did and have been doing,” he says.

The Taekjip Ha lab, where Okafor currently works, uses sophisticated biophysical manipulation techniques with fluorescence imaging to visualize and manipulate protein, RNA, and DNA molecules. Okafor chose this lab because he felt a strong connection with Ha, as well as the other trainees in the team, the work, and the overall environment, he says.

“TJ is really smart, really excited about the science. When we show him an interesting piece of data, he’s like a little kid. And he lets you do your thing, and encourages you to try out new ideas,” he explains.

Within the lab, collaboration happens often. For example, one of the postdocs there is a chemist who is interested in protein engineering and is working on a light-activated type of protein to open up DNA; when the light gets turned on, so does the protein, and when it’s turned off, the protein does the same. To test it, the two use an “optical trap,” which traps a single piece of DNA between two beams. When you pull on the piece, the DNA acts like a spring, and they measure the force it exerts and watch DNA-binding proteins interact with the DNA. Then they discuss the results together.

Okafor says, “I love my lab. It’s like the UN: people from all over the world. Each person in the lab had a team to root for in the World Cup. It’s diverse in specialty, too: physicists, biologists, chemists, all in one group.”

When he’s through the program, Okafor sees himself on the non-academic path. He’s interested in potential roles in research and development or management at gene editing companies. “I like to make decisions and lead teams,” he explains.

He does love mentoring undergrads, too, however. He adds, “You get to see them grow, and it’s easy to see yourself grow along with them. They’re exciting. They’re passionate. They show up and they’re ready to go, and want to share the knowledge.”

He would advise anyone considering the program to be open-minded about their research and research in general. Keep an open mind. Try something new. “Reach out to people you may not think you’re interested in; they can frame science in a way you hadn’t thought about before,” he says.