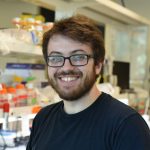 Greg Fuller studies how cells protect themselves in stressful conditions

Normally, our cells get energy from glucose that undergoes glycolysis and then cellular respiration. However, glycolysis is an oxygen-dependent process. What happens when cells don’t have that main energy-producing pathway available? And how do they adapt to these conditions?

“We thought they might do this to decrease the amount of time the metabolites have to diffuse between glycolysis enzymes. Glycolysis is a metabolic pathway, with multiple enzymes acting in a sequence. Each enzyme catalyzes a reaction, and the next enzyme in the reaction uses the product of the previous reaction. So, if you have enzymes close together, it’s more likely the metabolites will come into contact with the next enzyme in the sequence. By concentrating all these enzymes, you can increase the rate of glycolysis, allowing yourself to produce more energy in the absence of oxygen,” Fuller explains.

Fuller’s research has centered on the physical properties of the G-Bodies and understanding what physical mechanisms are required to get them to form. In addition, he’s studying what they’re made of. To do this, he’s been using a number of biochemical and genetic approaches along with live cell imaging, microscopy, and mass spectrometry to identify all the proteins that localize to G-Bodies.

In this process, he’s learned that many proteins in G-Bodies bind to RNA. This, he says, correlates with a currently popular idea in biology: Many different RNAs and proteins can interact. They form a phase-separated droplet within a cell—sort of like how oil and water separate when you mix them. This seems to be a way for cells to rapidly concentrate certain proteins or RNAs to react to a stimulus: Under stressful conditions, RNA and proteins will form what he calls “stress granules” throughout the cell. G-Bodies appear to have many similarities with these structures.

“Ultimately, we want to understand G-Bodies’ function and genetic properties. If you grow yeast cells in both oxygen-rich conditions and in hypoxia, [the latter] will consume glucose at a faster rate. This is consistent with the hypothesis that G-Bodies form to enhance the rate of glycolysis,” he explains.

This could be a mechanism our cells use to survive under low oxygen conditions. For example, research in a hepatocarcinoma-derived cell line shows that structures similar to G-Bodies will form. Some solid tumors will have a gradient of hypoxia, in which there is very little oxygen toward their centers. Fuller explains that cancer cells may be using a mechanism like G-Bodies to survive in hostile conditions—basically hijacking a normal mechanism to keep themselves alive, while making the environment toxic.

“[All that] is something that will have to be explored further,” he cautions. “Right now, we want to characterize these structures in yeast first. Then we can see how they’d affect mammalian cells.”

On the way here

Fuller grew up in Ann Arbor, Michigan. His father was a biologist, and encouraged him to explore science from a young age. He went to Hopkins for his bachelor’s: Initially he wanted to study neuroscience, but as time went by, he became increasingly interested in learning how proteins and RNAs interact at the molecular level. One of his research projects involved studying the progression and disease phenotypes of amyotrophic lateral sclerosis (ALS) in Drosophila.

When he graduated, he took a job in the John Kim lab at Hopkins as a technician. It’s also the lab he works in now. He enjoyed the intellectual and collaborative environment both as a technician and now as a Ph.D. student.

“John gives us a lot of freedom to try new ideas and take different approaches to answer questions. I never felt constrained to do one type of experiment. And everyone in the lab has been very collaborative. For example, we have weekly lab meetings, where one person will present their work to everyone. You get ideas from people who haven’t been hearing about what you’re doing, and that’s hugely helpful. I remember back when I had first started, I had never done a western blot to separate and identify proteins. I was able to shadow others before trying it. Now, I’ve done hundreds of them, and have shown others how to do it,” Fuller says.

Success near and far

Success would mean discovering something and publishing on it and contributing to the larger field. But what Fuller would also like to do is continue on in academia, perhaps with a lab of his own someday—and he has Hopkins to thank for giving him a foundation in his time as both an undergraduate and graduate.

Fuller says, “I think Hopkins is really helpful in that way. It’s a small umbrella program. You’re exposed to successful faculty, and they’re all role models for students. It’s an intellectual environment that’s highly collaborative. You talk to people about what they’re working on and it helps you think critically about what you are doing, as well.”

In addition to his current spot in the Kim lab, Fuller did three other rotations at Hopkins during his first year of the program. He rotated into James Taylor’s lab where he learned about computational tools, Sua Myong’s lab to learn about imaging in biophysics, and in Sarah Woodson’s lab, where he worked with RNA biochemistry and learned new tricks about working with RNA.

“People should keep an open mind, and branch out when you do rotations. You can try something you never thought you’d try. There’s a lot to take advantage of. Make the most of it once you get here,” he adds.