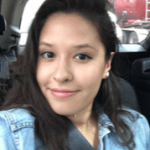 Everything Has a Place: But Why?

When a stem cell divides, it creates two cells. One will remain a stem cell, and the other will differentiate into a cell type that particular stem cell is used for.

Histones help regulate how accessible DNA is: Certain modifications on histones could cause a histone to hold onto to its DNA more tightly or loosely, Vidaurre explains. The looser the DNA, the easier it is to access for transcription.

Vidaurre’s work focuses on the location of histone proteins on DNA. “Flies, mammals, and most species have a histone locus, a specific region of their DNA where histone proteins and their genes are located. The histone locus is where histone protein is transcribed, but is translated outside of the cell and then brought back in. Proteins at the histone locus are involved in replication, transcription, and pre-messenger RNA processing. All RNA undergoes processing before it is translated to protein, and histone messenger RNA is unique since it has special processing proteins. This is a special region because genes don’t normally locate in one region, all together. They are usually more dispersed,” she says.

Another thing she’s noticed is that the histone locus is very large in germ cells, in that there are many more proteins in this area that support the process of transcribing RNA into DNA. “Replication proteins, transcription proteins, and mRNA processing proteins are super-enriched [in this area],” she explains. “There are a lot of those proteins there, much more than in other cell types at the same region of DNA.”

When DNA is synthesized, Vidaurre says, the cell has to make all new histones as well. This is convenient because all the histone genes are in one area, so this is where DNA replication in stem cells may begin.

Keeping it under control

How tightly proteins wrap around DNA can be important. There are some areas that we don’t want RNA transcription to occur; for example, in genes that are potentially only used during development. This would be an area where the proteins should wrap tightly around the DNA, keeping it away from rogue transcription. But there are other situations in which copies need to be easily made, such as what Vidaurre describes as “housekeeping genes,” such as cell cytoskeleton genes, which are always needed. Since they keep cells going, a looser fit works.

Studying the germline is important, she says, because it’s where proper cell development comes from. If cell growth starts out problematic, that’s going to lead to a host of developmental difficulties and beyond. “If you don’t have proper replication regulation, you’ll get [a situation like] an over-proliferation of stem cells, which can lead to cancer,” she says.

Vidaurre splits her time between two labs: Sua Myong, Ph.D’s lab, studying single molecule techniques in vitro—e.g., studying how a single protein interacts with RNA or DNA; and Xin Chen, Ph.D’s lab, focusing on stem cells in Drosophila. She enjoys working with Drosophila because not only is it a model organism, she says, but they’re relatively simple to modify for genetic study.

“Drosophila are easy to image, and easy to work with. And what’s cool is that there are regions where it’s straightforward to genetically manipulate them to modify their genome,” she adds.

She gets a lot out of both labs, she says, though each Principal Investigator (PI) has their own style. “Xin is super-intelligent and very nice and easy to talk to, and when you need help from her, she’s definitely available. And Sua is a hands-on mentor who likes to have us present what we’ve done and discuss next steps, weekly.”

Before coming to Hopkins, Vidaurre was a biology major and chemistry minor at the College of William and Mary, in Williamsburg, Virginia. Although she was always into science, she says, even from a young age, it was her undergraduate research experiences—especially with Drosophila—that got her excited about following that path after graduation. For two summers, she researched male and female Drosophila reproductive systems, and found she liked working with genetics and flies, and this fit with her interests in gene expression and DNA/RNA transcription.

While looking at graduate schools, she wanted to stay in the general area, and applied to Hopkins as well as other schools relatively nearby. But of all her interviews, she felt best at Hopkins, she says.

“I really liked the people. I felt they were very genuine and easy to get along with. And I liked the research: Hopkins has lots of different kinds of labs and research interests, but at the same time, it’s a small community. Everyone knows about each other and about each others’ work,” she explains.

Vidaurre advises prospective students to not only research potential programs, but also immerse themselves in research itself. And be prepared for the ups and downs of trying to discover something. “It’s not going to be easy, and what you’re working with might not pan out completely. You may have to switch your focus. Things may not work out immediately how you want them to,” she says.

She’s still deciding about what she wants to do once she finishes the program—other than being a first author on a paper or two.

Vidaurre believes she made the right decision, both entering a Ph.D. program and doing it at Hopkins. She says, “I’ve had to push myself mentally, and though I’m not doing everything on my own, I have support. I think I have grown a lot here.”