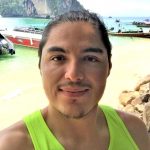 Chile’s Atacama Desert is one of the driest places on earth. It averages 15 millimeters—about half an inch—of rain a year. Some weather stations throughout the desert have never recorded rain. At 13,000 feet with cloudless skies, it also has the highest level of surface ultraviolet (UV) radiation in the world.

So, what forms of life dwell there, and why are they important?

At Hopkins, Gelsinger studies archaea, single-celled microorganisms that can survive in hostile conditions. In areas with weather generally ill-suited to supporting life, such as the Atacama, the only forms that make it are microbial life forms that reside inside various types of rocks.

These rocks, Gelsinger says, serve as little refuges in a big desert: Because of their pores and cracks, archaea live off of the tiny bit of the humidity in the atmosphere that gets trapped inside the rocks. The archaea found in these rocks are adapted to high-salt conditions and resistant to radiation and its resultant oxidative stress.

His work has been focusing on what these types of archaea do to regulate their oxidative stress and survive. And what he’s learned is that small, non-coding RNAs (also known as sRNAs) play a large role. Specifically, a particular sRNA named SHoxi (Small RNA in Haloferax Oxidative Stress), which regulates how much damage occurs inside the archaea, If SHOxi is removed, Gelsinger explained, the cell only has a 20 percent chance of survival.

“This is only one of the sRNAs that can be [activated] in this stress condition. This, along with other sRNAs and other non-coding RNAs, are important in other organisms as well—like our own cells. Non-coding RNAs could potentially help them become more resistant toward extreme environments like archaea. Oxidative stress is implicated in aging and cancer, so it’s important to figure out how to deal with it,” Gelsinger says.

Around the world and beyond it

This knowledge also has implications beyond our bodies and the world at large. Climate change on earth may mean we need to find ways to adapt to harsher conditions. And as we seek life—or hospitability to life—on other planets, we may need to rethink what water means for life.

Not only has Hollywood tapped the Atacama to resemble other planets, but NASA also calls upon it as well. NASA rover teams go there because it closely compares to how dry it gets on Mars. And a recent NASA rover expedition on Mars discovered hydrated salts in rocks, similar to what Gelsinger studies.

He’s been to the Atacama twice, he says, both with NASA expeditions. He says it’s the quietest place he’s ever been. “You’re eight hours from the nearest city. There’s no hum of traffic anywhere. What you do hear is the earth moving, rocks cracking. It’s truly beautiful. Clear skies. No light pollution. You can see galaxies with the naked eye,” he explains.

Life at the extremes

Gelsinger also worked with archaea as a microbiology major at San Francisco State University, where he studied the physiology and ecology of thermophilic archaea in geothermal hot springs.

He claims he’s always been drawn to life at the extremes. “When you study biology, they teach you that all of life has these same building blocks, yet you have organisms that survive in crazy conditions that we have never evolved to do. It’s a little sci-fi,” he says.

He learned about the CMDB program at Hopkins while part of a National Institutes of Health (NIH) fellowship as an undergraduate, but wasn’t interested at first, he says. He thought the program was very biomedical, which didn’t capture him. But after discussing it with his college mentors, he began to see the advantages of a rotation program. And when he visited Hopkins, he appreciated that students were the primary focus in the lab.

“The rotation program made me realize how much I loved all aspects of biology, and I joined Jocelyne’s lab because it was so interdisciplinary. It’s sequencing-based, which involves computational analysis, but it also allowed me to work in a controlled laboratory setting as well as in the field,” Gelsinger says. “Jocelyne is a great scientist—but also very compassionate and caring. She’s been very supportive of me networking.”

His experience in the lab has been positive as well, he says. There are so many resources. And everyone’s been interested in exploring and testing out ideas and bouncing them off each other.

This happens outside the lab, too: An avid brewer in his spare time, Gelsinger and his team in the lab finally made “Atacama Ale,” a Belgian-style creation, which is Dr. DiRuggiero’s favorite style.

Gelsinger will be defending his thesis in December. After that, he’s interested in doing a postdoc with a goal of running his own lab someday. Once he’s through here, he’d like to expand his horizons and move away from archaea and push further into the world of non-coding RNA. One option he’s considering is researching the gut microbiome, and how it affects the brain.

He’d advise students who are interested in the program that it’s a challenge—especially at the start—but worth it.

Gelsinger says, “Keep your head up the first year. It’s tough, because you’re balancing classes and research…and you can feel like you’re not good enough. We are all smart and creative here, and persistence is the biggest part of doing well in a Ph.D. program.”