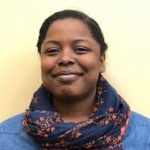 Most of us know the nervous system as the electric wiring of the body. Its cellular unit, neurons, transmit chemical signals to other neurons. But neurons also have support cells, called glial cells, or glia, from the Greek word for “glue,” suggesting they only have a role for structural support in the nervous system. However, neuroscientists have unveiled some ways that glia create a healthy neuronal environment.

At Johns Hopkins, fifth-year Ph.D. student Aurelia Mapps studies a specific type of glial cell called satellite glial cells and how they contribute to the sympathetic nervous system, which mediates your “fight or flight” or stress responses. Satellite glia wrap around the cell bodies of neurons, essentially hugging them.

Overall, glia cells are like the “babysitters” of the nervous system, Mapps explains. They monitor the environment around neurons, making sure they’re healthy, safe from harm such as environmental factors, and in contact with the other neurons they should be.

“These glia in other systems [such as mouse models] have been shown to exacerbate neurodegenerative conditions such as Alzheimer’s disease—issues we thought were specific only to neurons,” Mapps says.

When you get scared or nervous, your sympathetic nervous system comes into play: Activated by the hypothalamus, it uses nerve pathways to start bodily reactions. Your heart rate and blood pressure increase. Your pupils dilate. Your lungs contract to take in more oxygen.

But when sympathetic neurons are overactive, this can over-stimulate your organs, like your heart. This might lead to hypertension, heart disease, or possibly even death, Mapps says.

And it’s possible that hyper-functionality could have something to do with glia. “If you remove satellite glial cells, neurons no longer have the ability to tune when they should signal or not, so they stay on. For example, your heart rate would stay too high. There’s still too much input from the sympathetic nervous system,” she adds.

More than we need

It was her first experience with molecular biology, and Mapps wanted to return to that kind of environment. She liked that the CMDB program was an umbrella program, where she’d sample several different labs and techniques.

During her first year at Hopkins, she rotated through Marnie Halpern, Ph.D.’s lab studying genes that control left-brain/right-brain asymmetry in zebrafish, Mark Van Doren, Ph.D’s lab, researching the sex-specific development of gonads of fruit flies, and in John Kim, Ph.D.’s lab, examining the micro-RNAs in the germline of C. elegans.

Outside of studying neuron-glia interactions, Rejji Kuruvilla, Ph.D.’s lab also studies how growth factors are trafficked in neurons in order to develop and thrive. The lab also examines what neurons might do outside of signaling for physiological responses.

“If you remove sympathetic neurons in early development, your pancreas, for example, doesn’t develop correctly. This could lead to a lot of physiological effects, such as your inability to use insulin correctly,” Mapps explains.

Mapps says that Kuruvilla is a thoughtful, enthusiastic leader. “She is extremely excited about science at all times. If you ever have data to discuss, she’s more than happy to talk about it. You can talk to her about plans and it helps you stay motivated to continue,” she adds.

“There are a lot of different techniques among all these projects,” Mapps says. “So when we go to a lab meeting, you have to go with an open mind, because you’ll never know what you’ll hear.”

It is easy to establish collaborations between labs in CMDB, she says. Several years ago, Mapps recalls, she was trying to sequence satellite glial cells and she heard a researcher in a neighboring neuroscience lab was using a droplet-based sequencing to capture individual cells and sequence the transcript of that cell.

Ultimately, Mapps would like to be a principal investigator (PI) in her own lab someday. She finds beauty in teaching and being able to talk to different audiences, from specialist to layperson. The ability to communicate successfully is something that’s always important and helps you develop as a scientist, she says.

“At Hopkins, I’ve learned to collaborate [and communicate] with different people as well as think outside the box. Because CMDB is an umbrella program, you’re going to get different input for your projects. It will expand how you think about [science],” Mapps says.